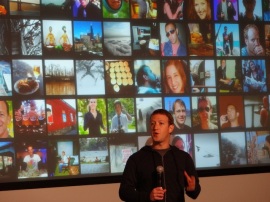 From my Forbes.com blog The New Persuaders:

Facebook took pains today to tell the world that its new social search service, Graph Search, is only a very limited tool that it will roll out very slowly over a period of months and years.

But CEO Mark Zuckerberg and his search staff couldn’t help but reveal their enthusiasm for the vast possibilities. For all their professed modesty, what struck me at the company’s press event introducing the service was how specific and broad-ranging Zuckerberg and his Graph Search leaders were about what it could provide: just about everything, potentially, that every company from LinkedIn to Yelp to Foursquare to Match.com to … yes, even Google provides today.

That’s an exaggeration, of course, that even Facebook folks surely didn’t intend. All of those companies have distinct, well-developed services with extensive user bases that are unlikely to shrivel up no matter how good Graph Search turns out to be. In most cases, they will probably retain a durable advantage for years to come. And as Zuckerberg said, it’s very, very early for Facebook search, and search is a devilishly complex discipline to do well.

Still, to hear it from Facebook itself, Graph Search will offers ways to provide similar services, sometimes in potentially easier and more effective ways:

* Recruiting: One of the first examples Facebook provided today was that Graph Search could help in finding qualified candidates for jobs. For instance, Lars Rasmussen, the Facebook director of engineering who heads the Graph Search team, mentioned that he could find people from NASA Ames Research Center who are friends of Facebook employees.

As investors, who bid up LinkedIn’s share a fraction today, no doubt recognize, that company has a pretty good if not exclusive hold on recruiters. And given that finding friends who worked somewhere is a rather specific subset of qualified candidates for a position, there’s not much chance recruiters will abandon LinkedIn for Facebook anytime soon. But Facebook, already used in various ways by recruiters, could siphon off activities that might otherwise have gone to LinkedIn. … Read more at The New Persuaders. But to conclude …

No, Facebook won’t kill any of these companies, certainly not anytime soon. They’re too strong, Facebook has too much still to build and then to prove, and rarely does a company kill another healthy company no matter how good its products are.

Investors may be thinking as much, as they sold Facebook shares to the tune of a 2.7% drop in price today. But if anyone doubted Facebook’s ability to keep disrupting the status quo, they surely shouldn’t doubt it anymore. Even with its baby steps into the search business, Facebook has again set new terms of engagement in the battle for the soul, or at least the cash register, of the Internet.

It would be easy to take today’s blockbuster initial public offering by business networking service LinkedIn as a sign that the IPO, the fuel for the tech industry’s wealth-creation engine, is back. But one IPO on the first day won’t tell us that. It’s just as easy to dismiss the rocket-ride to well over double its already-raised offering price as a sign of another bubble. Again, one great IPO’s first day doesn’t mean everybody will party like it’s 1999 (though if it’s “brain-dead” to suspect there’s more than a little froth in Internet investing, take me off life support now).

Still, there are many other lessons we should take away from LinkedIn’s IPO. Here are a few:

* Social networking has arrived as more than a cute phenomenon. LinkedIn may not be Facebook or even Twitter, but it’s serious networking, using people’s social connections to create real value. A lot of people already know this, but for the rest, it’s well past time to stop listening to the Luddites who think Facebook and Twitter are nothing but places to tell people what you ate for lunch.

* At the same time, it’s also apparent that social networking won’t be a winner-take-all business. Yes, a lot of businesses and even professionals use Facebook for business purposes, and will continue to do so. But many more people recognize the value in having separate circles of friends, colleagues, business contacts, and the like. Now, I’d bet that Facebook could be the biggest winner–winner-take-most, if you will. But Mark Zuckerberg clearly won’t own everything social.

* This is the first real sign of whether individual-investor interest in IPOs has returned. It was already apparent that the (literally) marquee names like Facebook, or even Zynga or Groupon, would rock the world when they go public. They’ve got fame, huge and fast-growing revenues, and soaring private valuations already, so using them as a proxy for whether smaller fry would go public was always erroneous. LinkedIn, by contrast, is a much smaller business that’s closer to those of dozens of private Internet companies that to date have been unable to provide their venture investors and entrepreneurial teams exits besides getting acquired. You can be sure that those private Internet companies are using LinkedIn to research potential chief financial officers and arranging meetings with Wall Street investment bankers, if they weren’t already.

* Those shady private-market valuations, which have given Facebook, for one, $65 billion-and-up valuations, suddenly don’t look so crazy after all following the first IPO of an actively traded private company on private exchanges such as Second Market and SharesPost. LinkedIn’s $2.4 billion valuation on those marketplaces, in fact, indicates to some that the supposedly savvy investors trading shares privately vastly underestimated the value of these companies. No doubt LinkedIn’s market cap will be volatile, so it’s unwise to think that Facebook suddenly will be worth multiples of its already breathtaking valuation. But it’s clear that the limited number of shares being traded on these exchanges, as well as the limited amount of information these investors had, didn’t necessarily cause them to overpay. At the same time, it’s unlikely the SEC will back off from scrutinizing whether to regulate them–in fact, it may move even more quickly if this IPO sparks renewed interest in the exchanges.

* LinkedIn’s success proves that Web companies aren’t entirely dependent on advertising for revenues, providing hope that other business models such as subscriptions and paid services are credible alternatives. LinkedIn makes most of its revenues not from advertising but from paid services for recruiters and premium subscriptions.

* Nice guys don’t always finish last. Talk to almost any entrepreneur about LinkedIn cofounder and executive chairman Reid Hoffman, and you’ll get nothing but admiration, and not just because he’s an angel investor in many dozens of their startups as well as a partner in the venture capital firm Greylock Partners. Hoffman seems generous with his time–not least, full disclosure, with me as a reporter since LinkedIn’s earliest days. I remember asking him once, years ago, about the libertarian, government-bashing leanings of some of his more famous colleagues from PayPal, and he sighed and recalled how, as the liberal in the bunch, he kept pushing them to give back to people less fortunate than they. Regardless of your politics, though, isn’t it nice to see that you can become a billionaire without being a jerk?

* For individual investors, the rule for Internet company stocks still should be caveat emptor. That  $9 billion valuation likely won’t stay that high in coming weeks or months, not consistently anyway, as the pent-up enthusiasm for Internet IPOs gets spent (at least until Groupon or Zynga or Facebook cranks it up again). For all the success of LinkedIn as a company and as a bellwether for Internet stock issues, it’s still a speculative play, and its share movement may well drive home yet another lesson: Individual investors should never put money they can’t afford to lose into anything their dentist is investing in, their cabbie mentions, or the press is hyperventilating about.