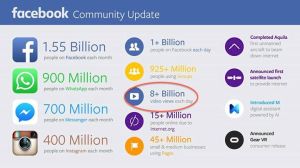 That’s how many videos people watch on Facebook every day, according to company comments after it reported third-quarter earnings today–and it’s double the number just seven months ago. More than anything–Facebook’s 45% ad revenue growth notwithstanding–that’s why companies that make their money on television advertising should be worried.

Granted, it’s easy to put too much stock into even a figure as eye-popping as 8 billion a day. Facebook counts any videos watched for as little as three seconds. And nearly all those videos are nothing like television shows or movies. Instead, they’re short videos of your child’s first steps along with trailers for actual shows and movies. So this is not yet prime time advertising as brand marketers think of it.

But what the 8 billion daily video views shows is that Facebook has arrived as a place where people are happy to watch videos of almost any kind–some 500 million people daily, in fact. Not only that, they’re doing so on the mobile devices where advertisers know they need to reach people–especially the younger people with disposable income–who have begun drifting away from linear television. …

What that means is that people on Facebook will now view video ads, the most lucrative kind of ad online or off, as a natural if not universally loved complement to the videos they’re already watching. At some point, ad spending on television–still the largest single place for marketers’ budgets–seems bound to shift at least in part to video ads. …

It’s clear that Facebook is now a force to be reckoned with in video advertising, something that seemed unthinkable just a couple of years ago.