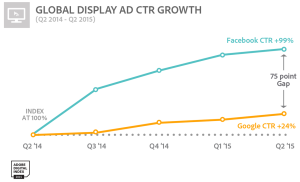 From my Forbes.com blog The New Persuaders:

When Google changed its formula for showing search results in April to favor websites it deems mobile-friendly, some businesses worried their sites would disappear from results. Mobilegeddon, as the algorithm change came to be called, was intended at least in part to spur publishers to quit sending people to sites that looked terrible or were downright unreadable on the smartphones where people spend more and more of their time online.

Perhaps that will happen eventually, but for now, according to a new report out today from Adobe, the change has indeed hurt brands that weren’t prepared. The Adobe Digital Index‘s second-quarter report on digital ads and social intelligence, which measures nearly a billion online ad impressions and 21 billion referred social visits from Facebook, Twitter, YouTube, and other social sites, shows that unprepared websites have lost 10% of their traffic compared with a year ago. And that decline is continuing to grow, says Adobe Digital Index principal analyst Tamara Gaffney.

Google has benefited, at least in the short term. Many marketers and ad agencies believe one clear goal was to boost mobile ad prices, which have continually lagged those of desktop computer ads. Indeed, prices measured as cost per click rose 16% from a year ago, according to Adobe.

But for marketers, the benefit is far less clear. Click-through rates on ads have fallen 9% from a year ago. “The bottom line is Google’s mobile business got better and marketers’ mobile business is getting worse,” says Gaffney. “They’re not getting the traffic they’re paying for.”