Can machines think? Not yet. But there is one at least partial test: the CAPTCHA, or “Completely Automated Public Turing test to tell Computers and Humans Apart,” those distorted characters you have to type into a website that wants to repel automated programs from spamming or making comments in blogs. Because CAPTCHAs by definition are intended to be recognizable only by humans, they’re widely considered one test of whether a machine can at least display a visual understanding close to that of people.

On Monday, the artificial intelligence startup Vicarious will release the results of a test, shown in a video, that it says shows its early prototype software can solve CAPTCHAs reliably. In particular, two of the three-year-old company’s cofounders, Dileep George and D. Scott Phoenix, say the AI software can solve Google’s reCAPTCHA, the most widely used test of a computer’s ability to act like a human being. 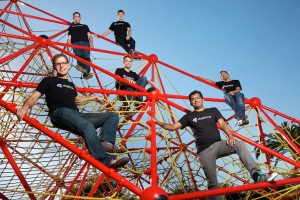 Vicarious team, with Phoenix (left) and George in foreground

In the tests shown in the video, the system scans the CAPTCHA and presents a list of possible answers–often topped by the correct one. The company claims it gets 95% per letter on reCAPTCHA, and that it solves reCAPTCHA 90% of the time. That compares with essentially 0% for state-of-the-art algorithms cited in a Microsoft Research paper. Even a solve rate of 1% is considered to beat the CAPTCHA system.

It’s tough for outsiders to assess the company’s technology, since it’s keeping a tight lid on details. George and Phoenix even requested that its location, which is to the east of Silicon Valley, not be identified. When it was pointed out that this was revealed on its employment page, they promptly removed it. The secrecy is understandable, especially given that bad guys who want to beat CAPTCHAs would love to see what they’re doing. …