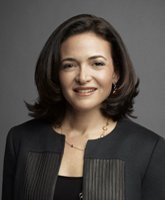 When Sheryl Sandberg left Google to join Facebook as chief operating officer three years ago, many people thought the pairing with CEO Mark Zuckerberg was doomed. Sandberg, a then-38-year-old former chief of staff for Clinton Treasury Secretary Larry Summers before building Google’s ad operation to 4,000 people, was as gregarious and polished as 23-year-old Zuckerberg was awkward and nerdy.

But it wasn’t long before Sandberg became Zuckerberg’s most valuable friend, thanks to her Madison Avenue connections and her ability to articulate a vision of advertising for them. In an interview for my article on Facebook’s ad strategy, Sandberg expanded on that vision, outlining the company’s unique advertising opportunity in social ads driven by what she calls word-of-mouth marketing at scale. Here’s an edited version of that interview:

Q: You’ve said Facebook’s sweet spot is the top of the marketing funnel–that is, ads that create awareness and consideration of a brand, rather than direct marketing. Is that turning out to be true?

Q: Yet it seems like most of Facebook’s ad business is really not branding yet–it’s more direct-response-oriented by advertisers that are looking for a fairly overt result, like getting an email subscription for a daily deal or trying out a social game.

A: I don’t want to confuse wanting a direct response with demand generation. (She walks up to the whiteboard.) Here’s the marketing funnel. Here’s what advertisers would call intent (in the middle of the funnel). So above this is demand generation. And below this is demand fulfillment. Here (at the top of the funnel) is awareness. And then you go all the way down to purchase. What every advertiser is looking for is this (she circles “purchase” in red). The question is, where do you start?

When you see advertisements on Facebook that want a response, I still think they’re demand generation. But they’re trying to get you here (she points to “awareness” at the top of the funnel). In other words, they’re taking you all the way from here (awareness) to here (purchase) in one ad or one experience. They don’t believe you got on the site looking for what they’re selling. When you go to search, you’re “OK, shower curtain. Looking for shower curtain.” You already have intent, I’m going to take you to purchase.

Q: But I have the sense that many advertisers using Facebook to advertise may also use search for the same thing.

A: They should use search. Search is fantastic for demand fulfillment. And we’re good for both. We just don’t usually start with the same intent.

Q: Facebook’s main push, particularly when you’ve spoken at Advertising Week events in New York the last three years, is for big brands, which still want to do traditional branding ads. But the bulk of your advertising is by smaller companies looking for people to take an action.

For the small guy, we offer the first demand generation opportunity in the first place. Sprinkles cupcakes can target the people in the areas where they have stores in an environment where they’re in discovery mode. Most times when you’re using the Web, you’re looking for information and you’re anonymous. You’re not really in personal discovery mode. You go to Facebook to share who you are and to hear about what other people are interested in. So for the first time, these small businesses can get to you when you’re in discovery mode in a way that they can afford.

Q: And for the big brands?

A: For the big brands, who have always done demand generation, we do it better. Because for the first time, you’re not talking at your consumers, you’re talking with (them), and they talk to each other. For the first time, you can do word-of-mouth marketing at massive scale.

Q: Of course, the challenge is that you’re not always in product or service discovery mode on Facebook. You’re looking at your pictures of your friends. That’s the challenge for Facebook, right?

A: But you’re in receiving mode on what your friends want to share. If you look at our site, even before ads, there’s a lot of commercial information. What coffee people drink, what sodas they drink, what shoes they run in.

Q: In your three years here, how has your thinking evolved on what kinds of ad and marketing opportunities Facebook can provide?

A: Three years ago, it was questioning: Does this work? Does anyone see those ads? Would this even be worth spending my time on?

Then two years ago, it was very experimental. Hmm, god, people are spending a lot of time there. I’ll dip my toe in that water.

Last year was people starting to go in and really make this a core part of their purchase.

And now is when we’re going big. Not with everyone, but we’ve got Coke and Starbucks with their 20 million fans using this as a real channel of communication. Wendy Clark of Coke has this great quote, she says she’s been able to go from the point of purchase to the point of thirst with her consumers.

Q: What does she mean by that?

A: Whenever they’re thirsty, they’ll think of Coke, because Coke’s part of their life because it’s in their Facebook feed. Think about how important that is for a marketer.

Q: So last year, you felt there was a certain inflection point in brands using Facebook. What made that happen?

A: I think the experiments the year before went well. Our Nielsen relationship and results are very important. People were asking, Does this work? Well, they have to try it so we have something to measure. They tried it, we showed ‘em it works, now they’re going to do more. So it became part of the core buy. But these are annual cycles for most people, so we needed that time.

Q: Were there were particular offerings you had or ways of working with advertisers that made a difference?

A: The Nielsen measurements made a really big difference. It’s the same way they measure other ads. It is trusted.

Q: Nielsen said the challenge in earned media of the sort Facebook is providing when people Like products or brands is getting broad reach. Can you now offer the kind of reach to many millions of people that big brand marketers want?

A: Oh yeah. We’re two or three times American Idol every day. That question’s been answered.

Q: Some marketers still aren’t so sure they can reach people at TV scale with the kind of advertising they want to do.

A: That’s different than reach. I remember someone from one of the large brand companies saying to me when we hit 350 million users, you guys are interesting. You don’t have to wait for American Idol or the Super Bowl; we’re every day.

Q: Sponsored Stories seems like a pretty big deal, a way to turn organic discussion of brands and products into ads.

A Sponsored Story is very organic. It’s not an ad product exactly.

Q: Well, sure it is. It wouldn’t appear that way if people were not paying for it.

So it’s the exact same content that would be in your news feed; it’s a story that’s published by Facebook. We give the marketer a chance to amplify that message, just to make sure people saw it. But we do not let them change the content, and that is very important. That does make it very different from other ad products.

Q: And how is that going over?

A: Very well. Remember, it has to be one of your friends interacted with a marketer who then bought a Sponsored Story for you to see it. It’s small right now. We could make it fake and big, but we’re not going to do that. It’s organic, so it’s going to be small and it’s going to grow.

Q: You’ve been pretty adamant about not offering everything that marketers want, such as flashier ad formats. Is that a challenge for the company?

A: People asked for it more before they thought our ads worked. Three years ago, when I went to movie studios, they would say, “I need my movie to really pop out of your page.” They don’t say that anymore. I have not been asked that in a solid year or year and a half. That doesn’t mean some people don’t want it.

Q: Where will Sponsored Stories go from here?

A: I can’t answer that specifically. But overall, we want the ads product to evolve as our site does, to make it as engaging as possible for users. Give users information that they want to engage with.

Q: So you don’t have five new ad products queued up to roll out over the next 12 to 18 months?

A: No, we’re much more iterative.

Q: Is that difficult for the marketers you want to work with? They often want to know what’s coming so they can plan.

A: We have long-run dreams and iterative plans to get there. So the long-run dream is we want local businesses to all use Facebook pages. We want Facebook to be the place you interact with your customers.

A: Yeah. If our goal is word-of-mouth marketing at scale, I think we have a long way to go. There’s great examples of it taking off, and there are examples where it doesn’t quite work. We have lot more to do.

Q: Most of the ads still aren’t very social.

Q: Can all ads be social, really?

A: We’ll see. The goal is to make it user-friendly and social.

Q: Facebook isn’t all about monetization, but you’re offering a fair number of services to marketers for free, such as fan pages and the ability to Like brands or products. What kind of new value can you create for marketers for which you can charge them?

Q: And Deals, too. Some of these get more to the bottom of the funnel, to a purchase. So are you looking for Facebook to offer services covering the entire marketing funnel?

Q: There’s an assumption outside and, I think, inside Facebook that there’s a Google-sized opportunity here. And yet a lot of the opportunity you’re offering marketers isn’t necessarily something that accrues to Facebook. Some marketers even say this is the Moneyball era of marketing. So how big can Facebook get if the trend is toward unpaid media?

A: When you offer things for free, people will pay to amplify them. That’s Sponsored Stories. We offer that for free and you can pay to amplify it. And we are at a scale where that payment for amplification, which has the property of being mostly organic, can be absolutely huge.

Q: Is Facebook too powerful by now, at least in the world of social media?

A: What really matters is what value you give to others. When people worry about too powerful, they’re worrying about too much value to you and not enough to them. So we run this company for value to users, value to marketers.

It gets to your earlier question: Why do we give away so much for free? Value to marketers. Why don’t we charge users? Value to users. If we continue to run the company where we provide tremendous value to users, to marketers, to developers, I think the world will deal with that very well.

2 thoughts on “Facebook’s Sheryl Sandberg: “Now Is When We’re Going Big” in Ads”